We are pleased to announce the launch of our new software update Thor bringing you even more power to your non-destructive testing with the dolphicam2. 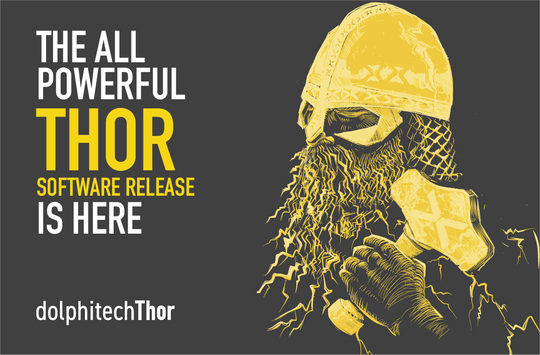 We are pleased to announce the launch of our new software update Thor bringing you even more power to your non-destructive testing with the dolphicam2.

Thor is the second in a series of new updates that will ensure our technology is constantly delivering you the best in the market and continues to solve your NDT needs. Thor software update is a powerful update that will enable to you harness the benefits of the dolphicam2.

It is now possible to calculate signal-to-reference ratio of rectangular measurements. This powerful new tool can be used to compare relative flaw amplitudes, either to a reference reflector, or to a background noise level. This in turn will help users perform quantitative analyses and make quicker accept/reject decisions.

Users can now connect two TRMs and toggle between which TRM is active for pulse echo. This requires a MxTTU™ license, please get in touch to order.

Previously to activate and pause during MxTTU™ mode either a foot pedal or clicking the software button were required. Now the physical TRM buttons can be used during MxTTU mode, making it much easier to operate as a handheld device.

MxTTU™ mode now includes colour coded LED lights on the TRM to help users identify which TRM is transmitting, and which is receiving.

The software status icons for the Black Box and TRM have been redesigned, and now include a second TRM icon for MxTTU™. The colors of the TRM status icons match the physical LED color-coding, so that users can quickly identify which TRM is which.

A new custom normalization option enables the user to normalize the TRM on any surface, including both the inspection surface and the back surface. This is particularly useful for Aqualene delay line TRMs, and for guaranteeing an optimum normalization across all TRM types. The custom normalization file can be saved and recalled later for convenience, traceability and repeatability.

Thor will not only provide an improved user experience when using your current platform but it's is where power meets performance, driving our new X series range which you will see over the coming weeks.

If you are signed up to our portal you can update your software there. If you're not signed up then it's quick and easy to do.

Pelicase includes a 14” rugged tablet, Black Box and cables for the dolphicam2+