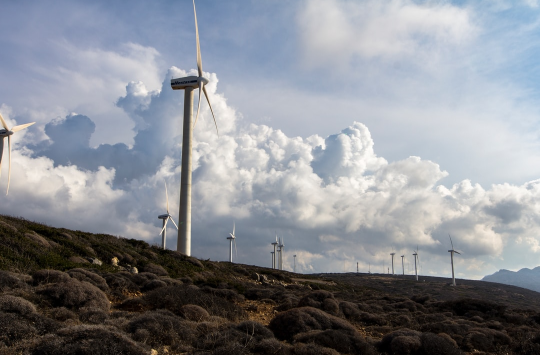 Wind energy, with its ability to generate clean electricity, has proven itself as a key method towards tackling the climate emergency. However, long-term integrity of the wind turbine blades remains vital for their safe operation. In-service inspection is therefore key, however this is generally limited to visual assessment. This is because the glass fibre composites used in the blades make techniques that look inside the volume of these difficult to use. Dolphitech’s unique ultrasonic platform is able to penetrate deep into the glass fibre and offers a superior inspection. This, in turn, provides asset owners with more detailed, volumetric information about the condition of their blades, and in doing so extendS the operational life of wind turbines.

During this project we performed a non-destructive testing (NDT) trial on the blades of several wind turbines on our customer’s wind farm, using the easily deployable dolphicam2 Ultrasonic platform.

Our customer was keen to understand the capability and penetration depth of our latest low-frequency transducer when used with dolphicam2, which provides much more accurate, detailed and faster visual performance.

The customer had specific requirements to review the thin and thick profile trailing edges, the rib location in the mid-chord of the blades, and also the foam core target areas.

They also wanted to understand the effectiveness of our dolphicam2, in order to assess impact damage to the blade compared to traditional visual inspection methods; as such, a wide range of blades and scenarios were tested to identify and prove the capability of our technology.

A key benefit of the dolphicam2 is that it's highly adaptable for wide range of scenarios, applications and materials, making it suitable for almost any industry.

Weighing in at 3kg for the whole system, the dolphicam2 is also extremely portable and easy to use, which cuts down the time taken to physically inspect. The platform will be ready to use in as little as 60 seconds, making it the fastest in the industry. Portability is a critical factor for the wind energy sector. Wind blades are the largest single-piece of installed composite structures in the world. With their decentralized, often remote locations, combined with their height, the portability of the NDT platforms used to inspect them is essential.

Different transducers can be used depending on the material type, area and thickness of the material being tested. This ensures that the most effective results are always achieved. During this specific project, a transducer TRM-EA-1.5 MHz used without a delay line, providing maximum penetration depth. This is required for the thick section glass fibre composites used in the construction of turbine blades.

An area was chosen at random for a simple stitched map, detail of the condition is provided in the image (below).

A different model blade, with a thicker configuration of the trailing edge, was also inspected. It was clear that the dolphicam2 could penetrate through the entire thickness of the material, which was approximately 28mm.

An area was chosen at random, approximately mid chord of the blade, where it was expected to detect the 2 stiffener ribs to be present. This was to confirm the capabilities to detect the presence of the rib and the integrity of its bond to the skin of the blade. As it can be seen in the stitched map shown, both were clearly detected.

This sample had some areas of the core where three, round flat-bottom holes at different depths were introduced to test detection capabilities. Dolphicam2, clearly located in the areas where the core is not bonded to the skin.

The comparison between our dolphicam2 non-destructive testing platform and traditional inspection is demonstrated through the results we were able to achieve for our customer:

• The dolphicam2 was able to fully penetrate the material, identifying layers of material and bonded areas. Previous tests have provided penetration depths to approximately 60mm.

• Our platform was also able to review and test the integrity of the skin-stiffener interfaces of the blades very quickly and with minimal set-up time for the equipment.

• Defects such as a lack of adhesive cause little or no change in the penetrated thickness and are hard to detect. However, the dolphicam2 made it easy to screen for these traditionally hard to find disbonds both while in service and during the fabrication stage.

We clearly demonstrated that the dolphicam2 NDT platform provided quantitative data for damaged areas of the blade, allowing engineers to assess whether to repair or replace the blade. Wind blade inspections were performed on-site and at height due to the platforms portability and ease of use. Thanks to our non-destructive evaluation, data was also quickly uploaded and shared with experts globally for post-processing and further analysis.

Repairing wind blades in the field used to present big challenges. However the dolphicam2 delivers a one-stop shop for inspection, and the information provided will enable quicker, and better informed decisions to be made about the continued performance of the blades.

The 1.5MHz transducer module (TRM) is towards the lower end of our frequency range.